An Inspiration to Vote

I turned 18 on December 28, 1975. Like the milestones of my driver’s permit and driver's license, I think I registered to vote on that day. I couldn’t wait to be old enough to vote. As a kid, I watched the horrors of the Vietnam War unfold each night on our television at night, and I witnessed a disgraced Nixon leave office. Even as a kid, I had a strong sense of right and wrong. As a family, we did not engage in political conversations, and I don’t remember my parents being particularly politically engaged. However, what I do remember is that they voted in every election. I remember walking with them to the neighborhood school so they could cast their vote, sometimes joining them. To me voting was a right of passage, something you did as an adult. Voting was a bridge from being ‘just a kid’ to an adult who could exercise their voice at the ballot box every two to four years.

The first time I voted was in the ‘76 presidential election. I voted for Gerald Ford. Since then, voting has been a habit. Whether it be a city council race, a local bond election, or for state offices, I have voted.

I have only missed one election since 1976 and that was due to a delayed flight returning home from a work trip. I stewed all the way home about missing the election. What if me not casting my vote put the wrong people in office or was the downfall for an initiative I cared about? I hardly slept that night thinking about missing that election. The next day, I signed up for Arizona’s Permanent Early Voting List determined to never miss another election again.

We never spoke about politics in our house but my parents voted, and they instilled that level of civic engagement in their daughters. As I grew older, I was very active supporting candidates from both parties who cared about my number one issue: education. I can remember getting signatures, passing out literature, and polling for both Republicans and Democrats. As long as they cared about Arizona’s public education system, I was their fan.

In August 2018, my mother was diagnosed with a serious illness and spent almost 2 weeks in the intensive care unit (ICU) at Scottsdale Healthcare. She was on a ventilator and hooked up to so many machines. The primary was right around the corner. I was not confident my mom would be well enough to vote but, if she was, I was going to make it happen. I remember when she came off the ventilator, with the primary about a week away she asked where her ballot was. She wanted to vote. My dad brought the ballot to the hospital room and we walked through it together. I filled in the bubbles of her candidates of choice. It was the first time I had ever helped someone vote. I read the directions on the envelope carefully because I wanted her vote to count. I remember checking on her ballot a week later. It had been received! I remember my mom smiling when I told her the news. 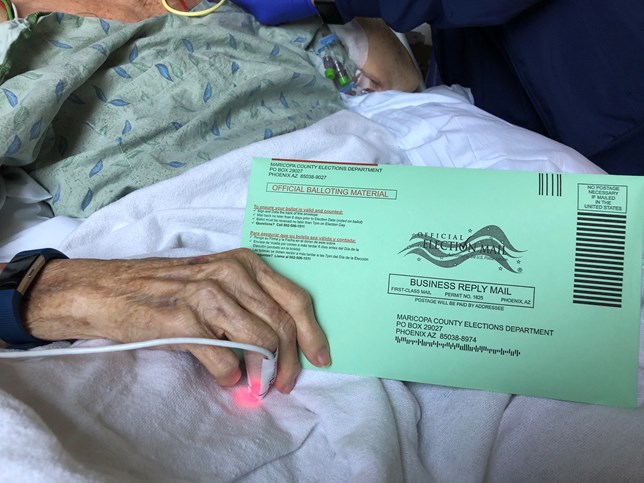 I remember thinking that if my mom could vote from the ICU just off of a ventilator, none of us had an excuse not to.

My mom passed away on January 5, 2020. I know that if she were alive today she would be asking me where her ballot was and making sure she voted. She had strong feelings about the community, state, and country and our elected leaders who were chosen to represent us all.

When I vote, I will be thinking of my mom. I am pretty sure if we compared our ballots, they would look pretty similar. She cared passionately about her family and this community. It is through my parents I learned the values of right and wrong, hard work, and caring about others.

I will admit that, over the years, I have focused most of my time and attention to the top of the ticket and not enough attention to the local and county races. Over the past few years, I have come to realize that I was part of the problem. Some of my past votes helped put people into office that were not good for our community and, at times, had larger agendas in play. This time around, I have made it my mission to learn about those who are on the ballot as well as understand the ramifications of the ballot initiatives. I have watched debates for mayor, school board, senator, and president. I have sat in on Zoom calls to get to know candidates for county board of supervisors and state races. I am taking this election seriously.

In the coming days and weeks, there will be three generations of Wiebkes voting. From my 92-year-old father to my 22-year-old niece, we will all be voting.

Whether you vote by mail or in person, make a plan and vote. You lose the right to complain about anything when you don’t vote. No one should sit this election out. If you or someone in your orbit is not registered to vote, you can register until Friday, October 23. If an 85-year-old woman in an ICU can vote, you can, too.

Voting is the bedrock of our democracy and we ALL need to do our part.

An Open Letter to Our State’s Educators

Centered: The Arizona K12 Center’s Executive Director, Dr. Kathy Wiebke, offers her education insights in this monthly column. Dear Arizona Education Professional,As I type this, it’s Nov. 6, Election Day across Arizona and the United States. The polls are open and if you believe the pundits and re

Are We Doing Our Best?

Centered: The Arizona K12 Center’s Executive Director, Dr. Kathy Wiebke, offers her education insights in this monthly column. In 1996, I was Arizona’s first National Board Certified Teacher. I witnessed first-hand the impact it had on my practice, my students, and the school community. It elevated

Centered: The Arizona K12 Center’s Executive Director, Dr. Kathy Wiebke, offers her education insights in this monthly column. In 1996, I became Arizona’s first National Board Certified Teacher. After 10 years, Board-certified teachers must decide whether or not they wish to pursue recertification.