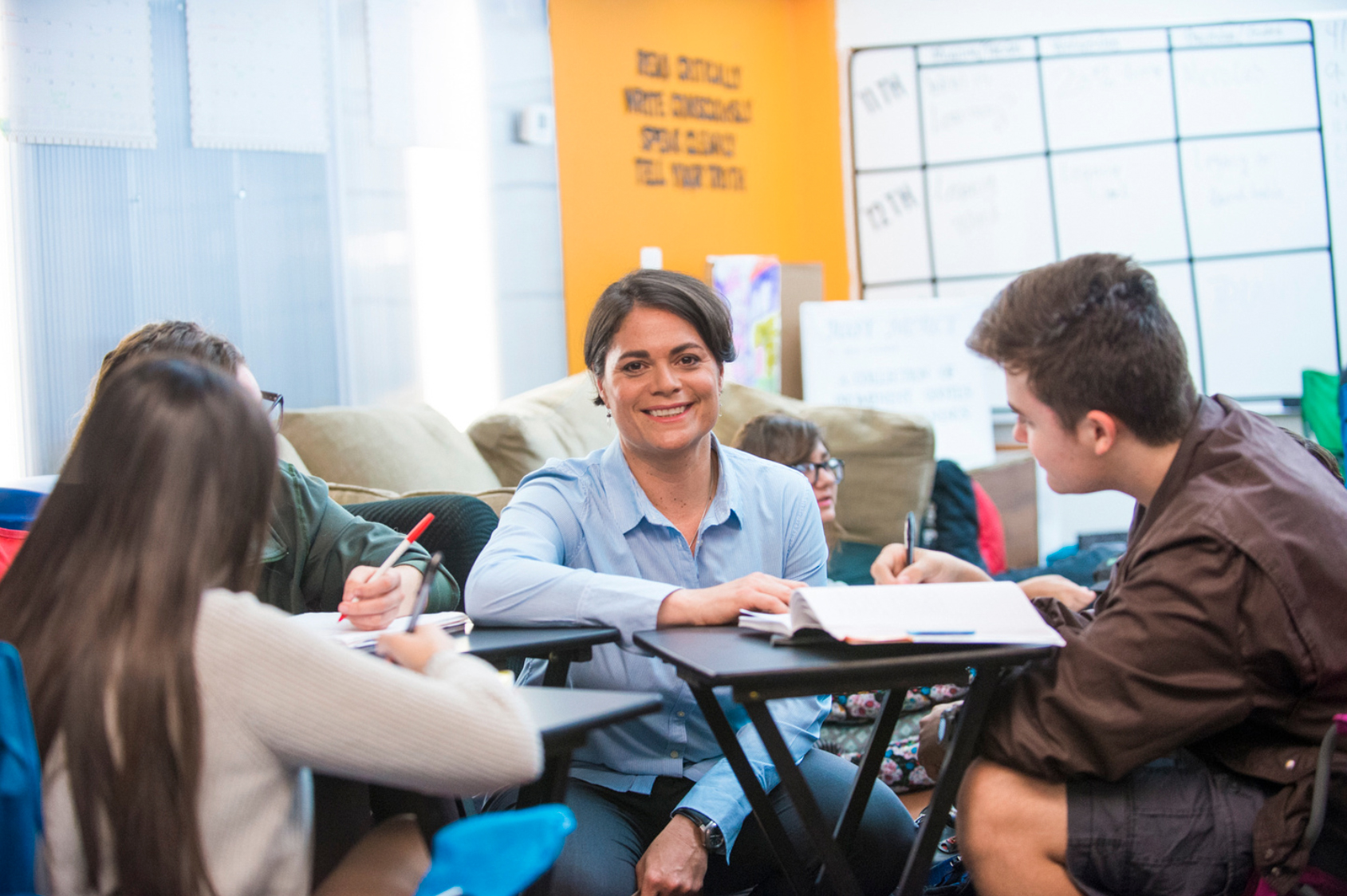 Eve Rifkin: “We cannot have systems, large or small, that treat kids as if they’re simply in a pipeline moving along.” Imagine a high school where teachers truly know their students. Administrators and staff, alike, identify learners as more than first and last names on a roster. Instead, the young

Eve Rifkin: “We cannot have systems, large or small, that treat kids as if they’re simply in a pipeline moving along.”

Imagine a high school where teachers truly know their students. Administrators and staff, alike, identify learners as more than first and last names on a roster. Instead, the young adults are known for their interests, strengths, weakness, and what makes them tick.

What might sound like a dream scenario is the reality at City High School in Tucson, Arizona, which is located in the heart of downtown, within walking distance of hip restaurants, shops, theatres, and courthouses. The small, charter school is home to students who sought out a more individualized and personal education where they spend their days learning and bonding with peers. Complete with an artsy, alleyway garden, a large-group meeting space, classrooms, a lunchroom, and more, the physical structure provides a place for students and teachers to connect on a deeper level.

The co-founder and current Director of College Access for City High School, Dr. Eve Rifkin, says students need to feel cared for in order to learn their best. She recalls countless times students have shared that for the first time in their lives, they feel happy at school — this statement made after nearly 14 years in the education system.

Having spent 10 years teaching in a large, district high school, Rifkin and two colleagues acted on their intuition to create a nurturing environment to cultivate student learning. The desire to educate the whole student struck a chord so deep that there weren’t any obstacles that could deter them from doing so.

“We kept feeling two forces were limiting us as visionary educators. We were seeing too many kids each day and the notion of relationships in schools was not being talked about. There were human beings showing up in our classrooms and we kind of knew their names, but we didn’t know anything else about them. The other force was that the curriculum felt detached from anything authentic. The kids were doing fine, but we knew learning should be so much more engaging and dynamic,” she says.

As a teacher, Rifkin recognized that when she was learning about a subject that truly interested her, it was the most exciting thing in the world. Yet, this feeling of enthusiasm did not translate to the learners in her own classroom. After reflecting on the loss of a student, while simultaneously trying to manage the systems-imposed frustrations, she knew it was time for a change.

“A more personal impetus for me was in 1995 when I had a student commit suicide. What everybody said the next day was, ‘I didn’t really know him,’” Rifkin recalls. She was completely shocked by the lack of humanity in the situation. “No one had anything to say about this human being. The school never did anything that felt intentional as a community. We lost a kid and there was no gathering, announcement, or moment of silence. The school didn’t miss a beat.”

As a teacher, she wondered what would happen if one day she wasn’t there. Would anyone stop and think about her? She couldn’t help but question if her existence in that school mattered.

“This was over 20 years ago, but that was the most compelling moment for me as an educator. We cannot have systems, large or small, that treat kids as if they’re simply in a pipeline moving along. They’re not just data points on a value-added measurement,” Rifkin urges.

With intense motivations, Rifkin, along with Brett Goble and Carrie Brennan, set out to establish City High School in 2004. Now, about 13 years later, the school enrolls close to 200 students in grades nine­­ to 12, and even has a waitlist. Clearly, the model is working.

Rifkin says the founding trio worked to create a culture of professional leadership. She admits there is not one educator who wears just one hat. Instead, employees serve in multiple capacities, whether it be as an advisor, mentor, club sponsor, etc.

“The culture of teacher leadership means you have teachers who are happy and stick around. It’s not always perfect or pretty, but it is rich and invigorating. Our teachers ask the hard questions that lead to rich conversations that may lead to real change,” she says. Most of all, she hopes her school is a motivator for educators in all circumstances.

“I hope this inspires all teachers because when it comes down to it, knowing kids well is a choice. It doesn’t have to mean changing the bell schedule and making a school of 180 kids. It could mean giving someone three extra seconds, giving them eye contact, or pushing pause on the day to sit with someone to ask a question,” Rifkin suggests. “Personally, I’d like to see a K-12 system [like this]. As the parent of a five-year-old, having a school whose number one intention is making sure kids are known and cared for … I would pick that in a heartbeat.”

Rifkin is just one of the teachers recognized as a teacher leader. Read about Mike Vargas, who helped a bill become a law (really!) here.