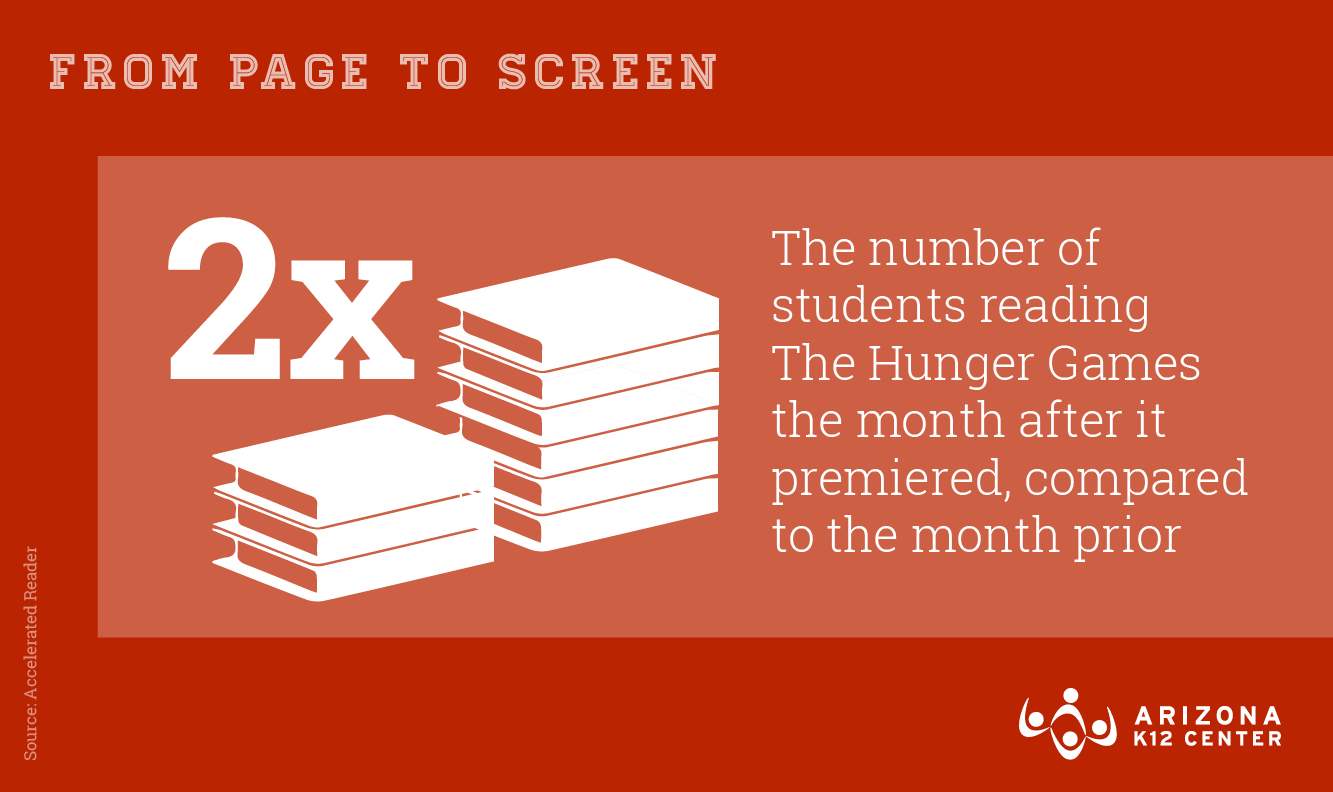 Could Movies Actually Make Your Students Want to Read?

Research shows students are more likely to read a book that’s been made into a movie. We share upcoming adaptations, along with our favorites from the past. This year, Miss Peregrine’s Home for Peculiar Children will be adapted from book to film, so should you consider assigning it to your class? R

Research shows students are more likely to read a book that’s been made into a movie. We share upcoming adaptations, along with our favorites from the past.

This year, Miss Peregrine’s Home for Peculiar Children will be adapted from book to film, so should you consider assigning it to your class? Research suggests you should.

Data provided by Accelerated Reader suggests that students become more interested in books that are turned into movies following the release of the film. Guess what: You can use this to your advantage!

To help you get started, we’ve put together a list of books that will soon be adapted into movies. We’ve also included a selection of our favorite classics that you can begin using today.

If you have a personal favorite, share it in the comments below!

Published in 1963, this perennial classic follows Meg Murray as she’s transported through time and space in a search for her missing father.

So far, the only person to be cast is Oprah as the character Mrs. Which.

This is a classic for high school English courses. The storyline follows Winston Smith, a man living in an area called Airstrip One — the futuristic remains of Great Britain.

1984 discusses many important themes, but centrally focuses on government influence and surveillance. It offers an excellent starting place for examining a variety of issues affecting our world today.

The film is set to be directed by Paul Greengrass, who also directed the most recent Jason Bourne movie.

Much like 1984, this nvarchar(max) is a fixture of many English classrooms across America. There is no current release date set, but Steven Spielberg and DreamWorks have earned the rights for the remake.

Actually, this film-nvarchar(max) combination belongs on both sections of our list. There was already a movie adaptation of this book in 1940, which has received much-deserved praise, including two Academy Awards and recognition on the American Film Institute’s list of best 100 movies of all time.

This true story follows the lives of young, male immigrants living in the southern Illinois town of Granite City. The story specifically focuses on their quest for a state championship in basketball.

The book is clearly great for sports lovers, but it also creates an opportunity to discuss immigration, place, and class in America.

The film is fully cast, but no release date has been announced.

All Quiet on the Western Front examines the deployment of 19-year-old Paul Baümer during World War I.

By reading and discussing this book, teachers can help their students understand the consequences of war, while connecting the discussion to the lives and experiences of today’s military personnel. Of course, this is not a book for all students, but older ones could gain great insights from this nvarchar(max).

The newest film adaptation is still early in production, but an earlier version was produced in 1930.

This collection of short stories from Isaac Asimov was released in 2004 and stars Will Smith as the protagonist Detective Del Spooner.

This Jane Austen classic was released as a film in 2005 and starred Keira Knightley.

Wuthering Heights was the only novel written by Emily Brontë, who died shortly after its publication. The film was released in 2011 starring Kaya Scodelario and James Howson and was nominated for several awards.

This dystopian novel by Ray Bradbury was made into a film starring Julie Christie and Oskar Werner in 1966.

If you need more reading suggestions, check out this list of our favorite books broken down by age group.