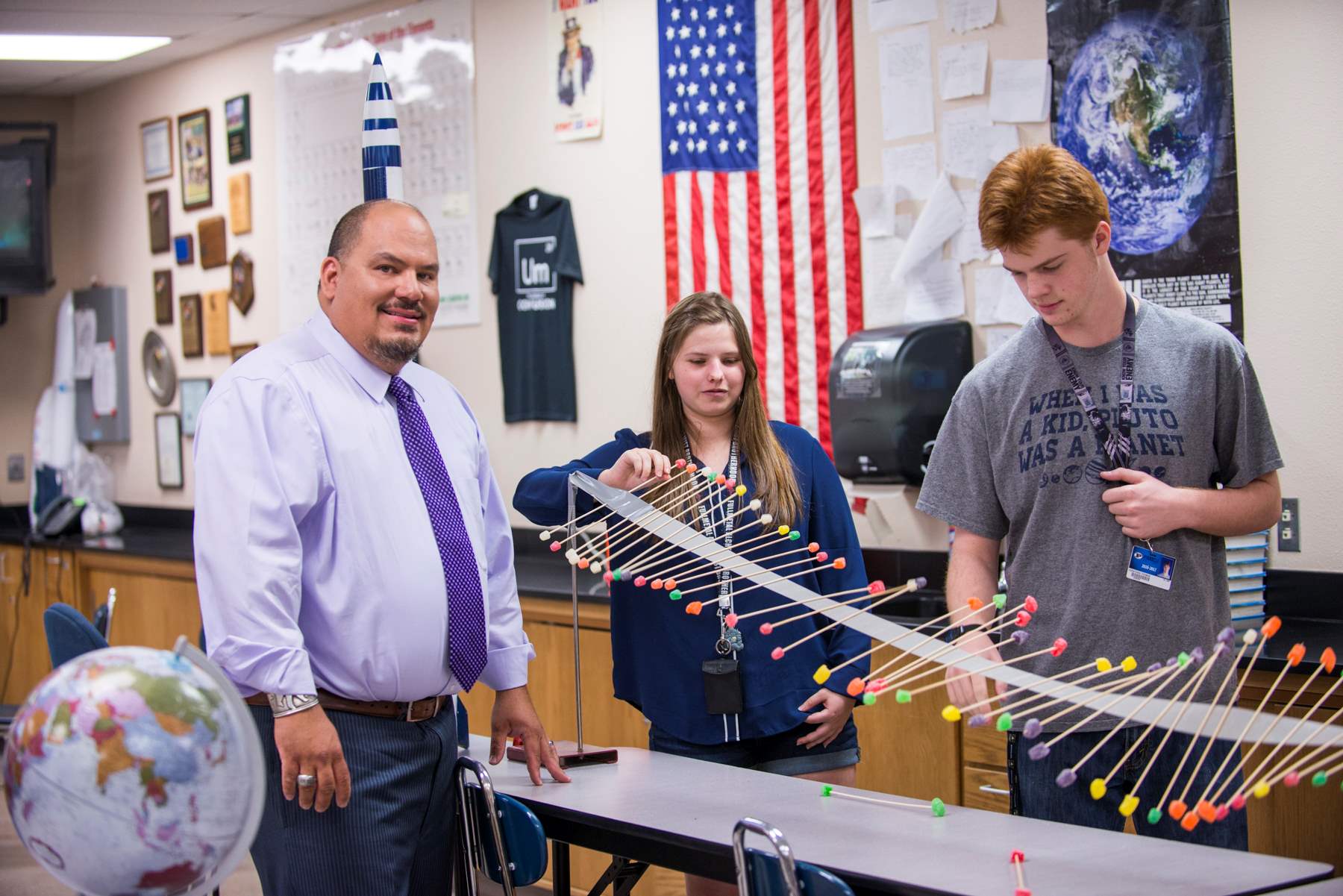 “I realized if I didn’t do something, nobody would.” According to Mike Vargas, teacher leadership isn’t a sprint, but a marathon. The Pinnacle High School teacher and track coach has dedicated the last 18 months to cultivating awareness about a dire reality in our state: There are only 159 physics

“I realized if I didn’t do something, nobody would.”

According to Mike Vargas, teacher leadership isn’t a sprint, but a marathon. The Pinnacle High School teacher and track coach has dedicated the last 18 months to cultivating awareness about a dire reality in our state: There are only 159 physics teachers in Arizona.

He first heard the staggering truth during a professional learning opportunity a few years back. Shortly after returning home from Europe where he taught abroad for 10 years, Vargas felt compelled to take action that would impact Arizona, the place he calls home. The 17-year teaching veteran couldn’t allow two subjects he loved and viewed as pathways for science, technology, engineering, and mathematics (STEM), physics and chemistry, to become extinct.

“I realized if I didn’t do something, nobody would. I’m just one guy, but hopefully I can inspire others,” he admits. “It’s OK to be uncomfortable if we’re going to leverage the profession, and this really does become an equity issue for our students.”

After being named a 2016 Arizona Teacher of the Year Ambassador for Excellence, Vargas felt he had a pillar to stand on to make his voice heard. He scheduled meetings with STEM supporters, education leaders, local policymakers, and others, thereby constructing a game plan that was mutually agreeable for all involved. Next, he spread the word through education organizations and served in a capacity he said he’d never anticipated in his life — he acted as an informal lobbyist. Thereafter, the bill survived six committees before landing on the governor’s desk.

In preparing to hear the final verdict of the bill, the Arizona native understood he might have to do just that: repeat. As a scientist, he recognizes that 99 percent of the time one doesn’t get the answer he or she would prefer. Similarly, the enormity of getting a piece of legislation passed after the first attempt is uncommon.

But, with a year and a half of hard work behind Vargas and a dedicated group of stakeholders, Governor Doug Ducey signed Senate Bill 1038 into law on May 8.

Although the approval was a monumental victory, the race is far from over.

“We’re playing the long game,” Vargas says. “Now, the goal is to create a program that’s sustainable, long-lasting, and will serve Arizona students and the community for years to come. To get the program kick started it’s going to take a full-court press in the next few months.”

With more work ahead, one thing keeps Vargas motivated to continue with diligence and self-sacrifice: He sees the future of America sitting within his class every day.

“If we’re going to make any real change in the state and start doing things, it’s got to be teacher-led, from the classroom, grassroots. One person can be a catalyst, but forming a group creates a chain-reaction. We’re at a point where we can’t rely on others to do it. It’s got to be you.”

This is part one of our series on teacher leadership. Stay tuned in the coming weeks (and months!) for more stories and videos about teacher leaders in Arizona.